Thinking of the well known Bible chronicle of the woman caught in adultery, I’m reminded of her accuser’s ‘rocks’. (John 8:1-11 NIV) The big shots brought the woman to the forefront and pointed out her sin, rocks ready to throw. Jesus didn’t condemn the woman, he called out the rock-holders.

But Jesus bent down and started to write on the ground with his finger. 7 When they kept on questioning him, he straightened up and said to them, “Let any one of you who is without sin be the first to throw a stone at her.” 8 Again he stooped down and wrote on the ground.

I love the word picture painted here! Jesus wrote in the sand first. His words aren’t recorded or revealed. But, I’d like to believe he wrote the words, forgiven, beloved, favored, cherished. Then he asked the rock-wielding meanies to examine their own hearts and drop their rocks.

9 At this, those who heard began to go away one at a time, the older ones first, until only Jesus was left, with the woman still standing there. 10 Jesus straightened up and asked her, “Woman, where are they? Has no one condemned you?”11 “No one, sir,” she said. “Then neither do I condemn you,” Jesus declared. “Go now and leave your life of sin.”

So the older dudes were the first to go. Does older equal wiser? Or is it more years of sin? Had they known her in “that” way? Only heaven knows. But what is known, is that there was NO ONE left to throw rocks, even though the law-of-the-land demanded it.

The image painted for me is that of Jesus, with his arm around the shoulders of the trembling woman. Surrounded by a circle of rocks on the ground. The accusers with the rocks have gone, just their rocks remain. In my painting, within this circle of rocks, Jesus’ words written in the sand remain… forgiven, beloved, favored, cherished. Jesus wrote the words before challenging the accusers. In my eyes, He meant the words for them as well. 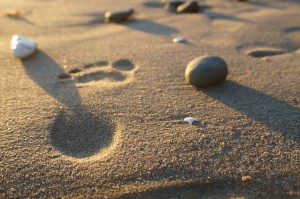